How I run: 'Overpowered' abilities

A staple of my recent design is to work with absolutes whenever possible. This is because to me, these are a lot easier to track. Examples of these are 'mortal steel cannot penetrate dragon scales' or 'fairy dust allows you to fly until you touch the ground'.

In the game I run for my students I had cultists use a glowing red orb that hypnotises whomever looks at it and makes them obey the commands issued by whomever holds the orb. The cultists used this to abduct an entire town, but after my players saved the townsfolk the orb didn't cease to exist so naturally my players looted it.

In the same adventure the players used that orb to hypnotise a giant octopus which they had ticked off. They sealed it in a magic jar and know that if they throw the jar at something a giant, pissed off octopus will come out.

Both these items are incredibly powerful, especially when combined. It gives players the ability to overcome a lot of obstacles with ease and this puts some GMs off of putting stuff like this in their games. To them, it feels like abilities like this will trivialise the sorts of obstacles that are a staple of adventure games, they are game-breaking, 'overpowered'.

For the latest project I am working on, in collaboration with Adventures Buffo, I reworked a class I had made a while back for my very first GLoG hack. The class makes players immortal, they can only die if they choose to do so. It is, perhaps, one of the most overpowered abilities you can give your players, but I think when done right that doesn't have to be a problem. 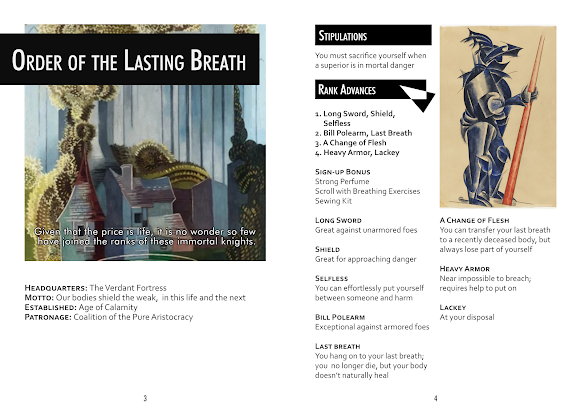 I think this class is a good example of how I design and run 'overpowered' abilities. To show what I mean, here are some principles I adhere to when dealing with abilities that some would deem overpowered:

In my mind the best abilities are those that are both a boon and a curse. I don't always manage to find that sweet spot, but it is what I aim for whenever I design something.

An orb that hypnotises everyone that looks at it, hypnotises everyone that looks at it. Allies, the current owner, random bystanders, they are all hypnotised and they will all follow the orders you give. The amount of times that my players have tried to use the orb and found it doesn't work as well as intended was really surprising, as my first gut reaction to them getting that item was 'I need to take this away from them before too long'. Turns out I didn't need to at all.

The giant octopus is sure to crush anything in a room you release it in. So there better be nothing in that room that you would prefer not to be crushed.

The same is true for the undying paladin. Sure, because your body is technically no longer alive you do not die. But for the same reason your broken body no longer heals. And just because you are immortal, does not mean your body is impervious to damage.

What I like about the design of these absolute abilities is that you can infer a lot from them without having to spell it out.

An orb that can hypnotise doesn't work on creatures that cannot be hypnotised. In my game that means demons and undead.

A giant angry octopus in a bottle is in some ways almost like a nuke, but you best make sure you have another vessel to imprison it in when you are done you will have to deal with the fallout.

Your body is immortal because you are holding on to your last breath, so anything that can steal your breath away will be able to kill you.

Another perk of absolute abilities is that it is relatively easy to have multiple of them around at the same time, allowing them to interact with one another.

The orb is magic. In this game, magic items feel different from mundane items the same way that a steak feels different from a live cow. You can feel that they are alive. This means that when a Basilisk with the ability 'turns living things to stone' looks at the orb, the orb starts to petrify and lose its glow.

The angry octopus might be more angry with its captors than it is with whomever it is the players want to use the octopus on. Worst case scenario, the two already have a friendly relationship.

4. Use oracles when you are stumped

My players are constantly trying to push how useful their abilities are. Because of all of the above, I often know how to deal with their questions, but sometimes I simply do not know.

If I didn't think about how certain things would interact with one another, I let my players know that I didn't decide on this yet and I don't know what would be most logical. In those cases I roll a die and we find out at the table whether or not things work the way the players want it to. At my table these are always 50-50 odds and the roll is always done in the open.

My players haven't found a way to use the jarred octopus yet and I have yet to see a player use the immortal paladin, but I feel confident that whatever they might come up with I can deal with, even if I didn't think of it prior because of this system. And my players never feel cheated. They asked, I gave them a fair shot and the dice decided either in their favour or against them.

5. Expect nothing, instead be curious

When I asked some of my (former) players how I run games, one of them said that I don't seem to have a predetermined kind of challenge in mind when I populate my world with obstacles. If players find a way to trivialise an obstacle with an auto-win ability, I let it happen as I seem to be primarily interested in seeing how things play out. I think this is definitely true, even if it isn't always in my mind when designing or running situations. But it might be both the easiest and the hardest thing I do to run 'overpowered' abilities, depending on your own playstyle. It is the easiest in the sense that unlike the other tips, you really don't have to do anything; there is zero cognitive load. However, if you think in terms of 'this is going to be a fun combat encounter to run', 'this is going to be an epic boss fight', 'I'm looking forward to roleplaying this interesting NPC', or even just 'this will be difficult', changing your mindset to not caring if your players will conform to that expectation is probably way harder than adding a bunch of tricks to your repertoire.

Because yes, the orb was used to not only trivialise an encounter with a giant octopus, but it even allowed the players to capture it in an hour-long ritual.

And yes, when they are going to find a good use of that octopus, it will probably wreck anything that is opposing them.

And yeah, even if your body won't heal, you can probably still shield your allies from arrows without difficulty, taste food and drink for obvious poisons, enter rooms filled with deadly gas without trouble and stay submerged for as long as you want.

I think all of that is fine, because I am primarily interested in seeing how the pieces I have set up will interact with the players. If they blast through one obstacle, I'll just see how they will deal with the next one.

My players love using these 'overpowered' abilities. They are incredibly impactful, but because of the way I run them they still get to feel clever whenever they find a way to use them effectively. And when things inevitably turn sour, like when a player accidentally freed some 20 goblins from his hypnosis by burning them,  this creates very memorable situations and interesting problems for the players to overcome.

Because of this I would encourage everyone to try out giving your players abilities that are often considered to be overpowered. Even if you end up not running them the way I do, I think it wil be a very fun and interesting experience.

Email ThisBlogThis!Share to TwitterShare to FacebookShare to Pinterest
Labels: How I run